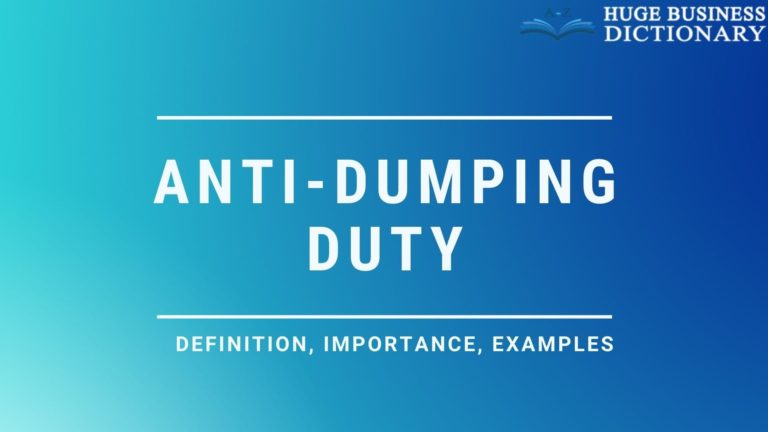 Definition: Anti-dumping duties (ADDs) are imposed when the value of a product manufactured in one country and sold in another is significantly different from the product’s market price in the first country. It protects domestic manufacturers who would be lost due to higher export.

These duties are in place to protect domestic manufacturers from being unfairly disadvantaged by foreign companies offering cheaper products in their market. Anti-dumping duties are often placed on several products, including furniture, film, software, electronics, and pharmaceuticals. These duties vary from country to country and change from time to time as market dynamics change or new laws are introduced.

Anti-dumping duties are meant to protect domestic producers but have been criticized for increasing prices on basic goods and services produced by domestic businesses. Implementing anti-dumping duties can raise the price of some products and services offered by manufacturers in the domestic market, thereby adversely impacting local businesses and consumers. In some cases, price increases may even result in the insolvency of some firms.

A nation can raise its economic power by imposing duties on foreign products manufactured in that nation but sold at low prices to consumers worldwide.  Such policies ensure that domestic suppliers have an incentive to keep production facilities open and continue providing goods at lower prices to consumers worldwide.  In theory, such policies can increase exports by making it more difficult for companies to obtain low-cost raw materials from abroad. Anti-dumping laws also make it more expensive for foreign competitors to buy production equipment or factories in nations with strong anti-dumping policies.

Dumping is illegal when it discriminates against U.S. manufacturers. The ITC determines anti-dumping charges by assessing the price of a product against its value—that is, the actual costs that U.S. consumers pay compared to products offered for sale in other markets. If the ITC finds that a product is being sold at a below-market price, it can impose a duty on the imported product. Duty is not a tax, and it is assessed at a flat rate—no per-unit cost or percentage markup. Instead, it operates as a price increase for all consumers who buy a product made in America when the duty is paid.

Dumping is strictly regulated by national legislation and subject to enforcement under the WTO Agreement. WTO rules on anti-dumping duty vary with country law but generally require governments to give preferential treatment to imports from firms that have fulfilled their part of the duties owed to WTO members. Governments have used this duty to collect duties from firms that fail to comply with environmental regulations and other commitments made under WTO agreements.

In a nutshell, Anti-dumping is an essential element of the effort, as it prevents governments from unfairly providing a competitive advantage to specific businesses through export subsidies or restrictions on domestic production. If discovered, an action may lead to an investigation and possible suspension or fine by the WTO. An investigation into suspected dumping can lead to a panel discussion where reasonable international concerns concerning dumping can be addressed. Such concerns may include labor standards, environmental protection, consumer protection, and intellectual property rights.