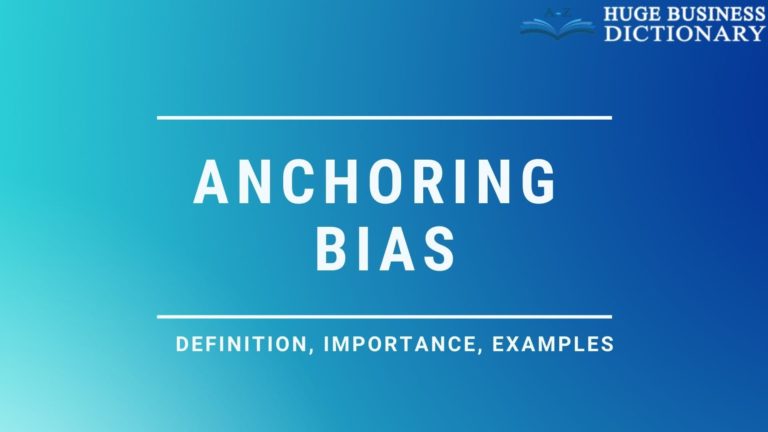 Definition: Anchoring bias is an error in judgment. When making decisions, people select and base their decisions on pre-existing information, i.e., based on beliefs or reactions that have already been formed. Therefore, anchoring bias can lead people to make poor decisions because they are unaware of alternative viewpoints or information that could change their beliefs or reactions. The more you rely on an initial decision or information as fact, the more likely you are to make biased decisions in the future.

The anchoring effect says that your views will be strongly influenced by information supporting your view when you have a strong opinion on a subject. This is an important concept in behavioral finance because it influences our actions based on prior knowledge.

When selecting an investment, many people go with what seems to be a sure thing — a low-risk, high reward investment. This is called as the anchoring effect, and it causes people to underserve themselves in the market. It can be easily manipulated by an advertising firm or a financial advisor who can make recommendations on “best investments ” based on how strongly they feel about the asset they’re recommending. The anchoring bias is so powerful that it can influence people to spend more than they would if there was no bias!

The anchoring bias is a powerful psychological force that can influence markets ever so slightly, nudging prices up or down slightly even when there no change in market conditions. It can influence both prices charged and transactions as prices are so uncertain that people will pay more or less just based on their unconscious belief that they are getting a good deal. In short, anchoring is where you get your price for a service (good or service quality) and then pass it along to your customers as if it were an additional cost to them.

Anchoring bias occurs when people pursue activities that pay off in the short term but carry a high risk of failure in the long term. It is so powerful that it can be difficult to resist even when it seems like an irrational choice. The best way to avoid this is to be aware of it and take steps to break free of it. Breaking free from anchoring bias usually requires changing some aspect of your pursuit, either in the short term or the long.