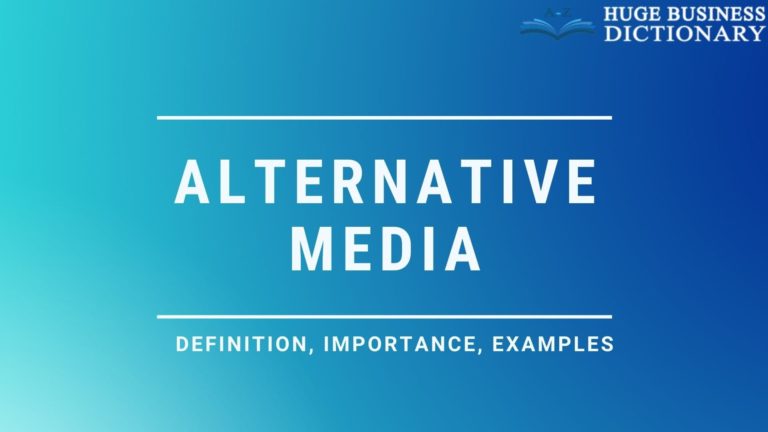 Definition: Alternative media is a term often used to describe online and non-mainstream media. It refers to a range of alternative perspectives, opinions, and images generated and disseminated through multiple channels. Some individuals and campaigns are actively involved in creating alternative media; others merely consume it.

Alternative media has three aims. First, it offers an alternative point of view. Second, it improves upon the offerings of mainstream media in specific ways. Finally, it shows how those platforms—particularly social media—can be effectively used for political activity and organization. Alternative media is not media directly related to a traditional industry like print media or broadcast media. Rather it includes blogs, wikis, forums, message boards, and YouTube videos.

Alternative media has several characteristics that distinguish it from mainstream journalism. Firstly, it does not rely on paid advertising; instead, it relies on donations from readers and listeners. Secondly, it focuses on topics that are often ignored by mass media; socially conscious issues, environmentalism, the Palestinian cause, for example, are much more prominent on alternative media than on major media.

Alternative media has a wide variety of sources. Some of its articles are factual, others are opinionated, yet all are presented with a critical eye toward our current situation and possible solutions. As a result, alternative media can give you a completely different perspective on current events. It can also be more relevant and current than the news outlets that populate your television and radio screens.

Alternative media is diverse and offers a view into the lives of those left behind economically. The blogs and forums that exist offer a perspective from those who feel left out of mainstream media. The information is often anecdotal, but it’s reliable, consistent, and sometimes quite frightening. It usually comes from sources no one else will publish.

Alternative media has provided an outlet for writers to voice out their opinions and fight against the social stigmas associated with their genre. It has also helped those who have no one else to turn to but each other when their own voice cannot be heard.

The alternative media has a different point of view. It’s not as well known, but they’re out there. The internet is full of web blogs and websites that provide independent content. Even though they might seem like shoddy outlets with copy-paste headlines and low-resolution photos, there’s a reason why people still turn to these places for information. They give voice to people who wouldn’t otherwise be heard otherwise: those who feel unheard or unrepresented in our mainstream media.

Alternative media can be a useful way to share information and keep informed on important topics that traditional media outlets aren’t covering. However, for it to be successful as an alternative to traditional media, it needs to do more than merely reproduce and reproduce without modifying its reporting. In addition, it needs to do so in a manner that doesn’t cause unnecessary harm to those who have legitimate concerns or issues that need addressing.