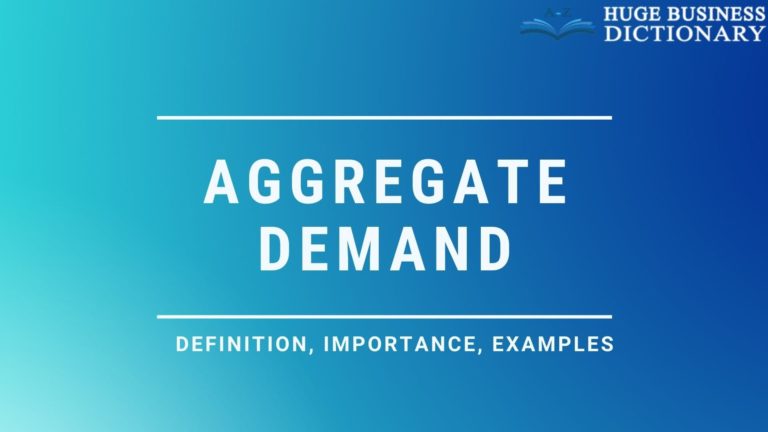 What Is Aggregate Demand?

Aggregate demand is an economic term for total demand in the economy at a given price level. Short-run aggregate demand, which only considers fixed prices over the short-term, pays no attention to inflation or deflation by assuming that all firms can adjust their prices up if they are experiencing greater demand. Meanwhile, long-run aggregate supply assumes that all prices are flexible by considering changes in productivity of labor and capital as well as expected future price increases based on inflation.

Aggregate demand consists of all consumer, capital goods, exports, imports, and government spending programs. These elements are held equal in an economy when they trade at the same market value.

Aggregate demand is a useful indicator of the overall economy, but it does have drawbacks. First, because aggregate demand is based on prices, it does not represent the quality of life or standard of living in a society.

This problem can be fixed by looking at the real gross domestic product (GDP), an economic indicator that measures how much the total output of goods and services has increased. Real GDP takes into account changes in price as well as changes in production. The other drawback of aggregate demand is that it only considers the total output at a given price level; it does not necessarily ensure that everyone in the society will enjoy the improved living standard.

It is difficult to use aggregate demand to generalize causality in regression analysis because it can be measured in many different ways and comes from many different sources.

A rise in the aggregate demand for goods and services, which increases the overall price level, can be caused by an increase in any of several components of aggregate demand: consumption spending (C), investment (I), government purchases (G), or net exports (NX). The Aggregate Demand Curve helps us see how changes in each of these components affect the entire economy.

The formula tells us that the total demand for goods and services in an economy at any given time is equal to the sum of consumer spending (C), business investment (I), government purchases (G), and net exports (X-M).

The sum of consumer spending, private investment, government spending, and net exports makes up all the spending in the economy. The equation for aggregate demand, then, is just a way of stating that total spending equals total income. Or, more broadly, that aggregate supply equals aggregate demand.

Currency Exchange Rates: The value of the U.S. dollar relative to other currencies will either create or stifle aggregate demand. For example, if the value is low, the demand for U.S.-made goods in foreign markets will increase, while foreign-made goods purchased in the U.S. will decrease.

The global economic crisis and its impacts on banks and other financial institutions resulted in widespread financial losses, causing a contraction in lending and reducing business spending and investment.

Businesses were going through a difficult economy due to a lack of physical and financial capital, which caused them to lay off workers. There was a steep decline in GDP during the recession, with a contraction of total production in the economy during that period.

Economic downturns such as the Great Recession (and 2007-2009 financial crisis) occurred due to a poor performing economy and unemployment rise when aggregate demand for goods and services outpaced aggregate supply. Personal savings increased during this time when consumers held onto cash due to uncertainty in the future.

The debate about the relationship between aggregate demand and economic growth has been ongoing for many years.

What’s the Relationship Between GDP and Aggregate Demand?

GDP is essentially the sum of all final goods and services produced in an economy over time. It’s also known as the aggregate supply.