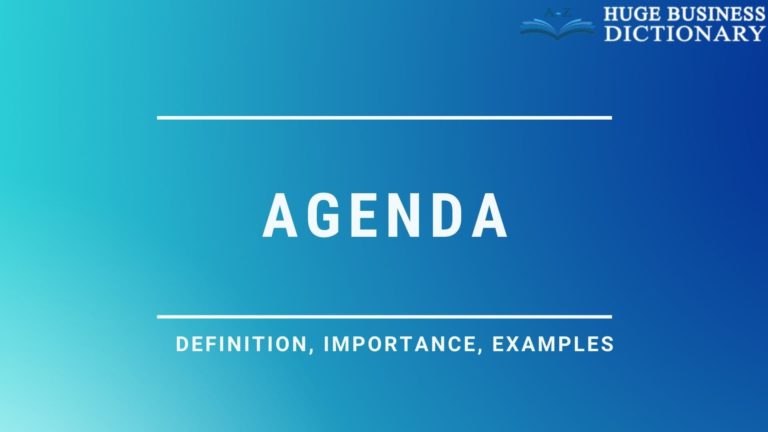 Definition: Agenda originated from a Latin word meaning “things to be said.” It was used in English to mean “a list of things to be done” in the early 15th century and is still used in that sense. The current use of the term in modern English is believed to date from the mid-19th century.

What is an Agenda?

Agendas are the most important tools in the meeting planner’s kit. They are a way for people to suggest what should be discussed and for the meeting organizer to consider when deciding what to focus on. Generally, it is best to have a relatively simple agenda that reflects the main topics you want to discuss in a business meeting.

Agendas can provide structure and focus for meetings, but they can also help attendees understand the purpose of the meeting and prepare for their participation. Participants themselves can write meeting agendas or create an outside party (e.g., a facilitator).\ It is typically prepared by the chairperson of the meeting and distributed to the participants before the start of the meeting.

Agendas may be simple lists of topics to be addressed, or they may be more detailed and include proposed solutions for issues to be discussed. Often the agenda is prepared after the circulation of notice to include members’ opinions and ideas on what should be discussed. For example, suppose an association’s governing body is deciding whether or not to change its bylaws. In that case, members can submit their opinions to the secretary, who will include them in the agenda.

If a meeting involves secret or confidential items, such as national defense or security, an agenda may not be circulated before the meeting.

Who prepares an agenda?

An agenda is a detailed plan of how a meeting will be conducted. The elements of an agenda include:

– A list of the people who will attend and their agenda topics (agenda items) and roles (e.g., chair, note taker, timekeeper).

– A list of materials to be reviewed before the meeting.

– Topics for discussion at the meeting. These are sometimes called “action items” or “action points.” Each topic is written as one or more action items.

– Procedures to follow during the meeting, including how much time should be devoted to each agenda item and how decisions will be made.

– How much time should be devoted to breaks and lunch.

What terms are used in preparing and using an agenda?

Features or characteristics of agenda

Importance or necessities of agenda

What if there were no agenda?

There is no agenda; then, the meeting will probably be disorganized and time-wasting. Members of a meeting may spend time talking about what they should talk about rather than talking about it. It may be difficult for everyone to know when the meeting has finished or how to end it. People may try to take control of the meeting by using personal attacks or hostility. This may cause the meeting to achieve nothing or very little.

The solution to these problems is for everyone in the meeting to know what they are supposed to be doing. For this to happen, someone needs to make an agenda that contains all of the information people need. The agenda should contain everything that people need to run the meeting efficiently and successfully.

If there is no agenda, then it is likely that the meeting will have problems running smoothly and achieving its objectives.