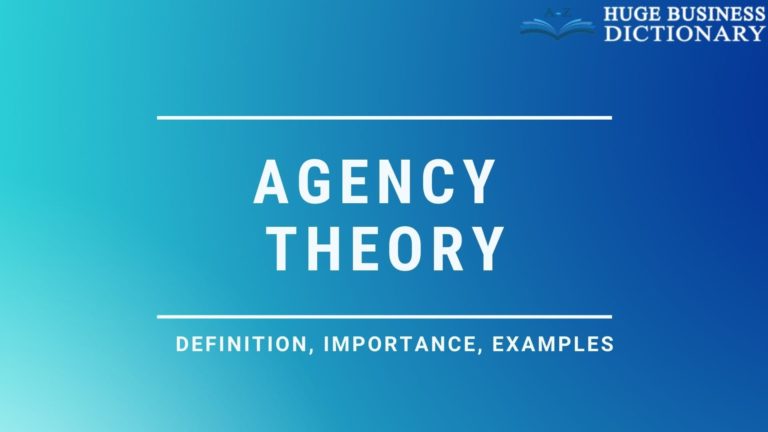 What Is Agency Theory?

The theory of an agency states that principals hire agents to act on their behalf. They are put in place to perform transactions on behalf of the principal. The agency has many jobs, such as ensuring the transaction fulfills the principal’s wishes and ensuring no conflict of interest is involved when executing a contract or operating under a system.

Agency theory is a framework for analyzing the agency problem and the resulting problems in a principal-agent relationship. The theory has been used in accounting, corporate finance, labor economics, financial economics, political science, technology management, and military science applications. It draws from and contributes to other areas such as behavioral economics and organizational theory.

Agency theory concerns the actions agents (such as employees or managers) take on behalf of their principals (such as shareholders or customers). These actions potentially affect the interests of both parties, and thus it is important to design incentives to align them. Agency theory also encompasses actions taken by principals (such as shareholders or customers) that change the incentives of their agents.

An agency is a professional service organization that manages other’s money. They are entrusted with someone else’s money, but the client has little or no input. The agent recommends actions that have little or no risk because any losses are for the principal.

The concept of agency theory can be described as financial planners collaborating with portfolio managers are agents on behalf of their principals. The responsibility of the agents is to monitor the assets that belong to their principals. Even though lessees are tasked with making sure valuable products are protected, they are less interested in protecting them than real owners.

Areas of Dispute in Agency Theory

For example, some executives may focus on meeting short-term objectives at the expense of long-term growth. However, this could hurt the interests of shareholders, who care most about the future stability and performance of the company.

Many disagreements between principals and agents are based on differences in risk profiles. For instance, shareholders may disagree with the bank management on the effectiveness of decision-making procedures or loan approval levels.

Some proponents of agency theory have suggested a possible way to reduce or eliminate agency loss. This is generally called “reducing agency loss.” The reduction in agency loss is accomplished when the principal and agent negotiate sensible contracts that detail the agent’s task and the compensation they will receive for completing that task.

One of agency theory’s most powerful tools is incentives to align managers’ interests with their principals (stockholders). Corporate stock options are one example, as are bonuses based on company performance. Other strategies include linking executive pay to long-term performance and restricting the ways managers can cash in their company stock.

The compensation practices of some companies have led to concerns that executives will sacrifice long-term company growth to boost short-term profits and their pay. One compensation scheme which has arisen as a result is based on long-term goals, offering payouts for meeting objectives five years down the road. Critics believe this creates an incentive for short-term objectives because poor performance can be overcome by hitting targets further into the future.

One is performance-based compensation, where the hired party is rightfully rewarded for clear and precise results. Another would require someone to put up a bond, which is essentially an insurance policy for the client to ensure the agent acts accordingly. The last option (ultima ratio) is to fire the agent if he doesn’t act accordingly.

What Is the Principal-Agent Problem?

The principal-agent problem or agency dilemma is a conflict of interest encountered in both individual and organizational decision-making.

In the context of decision-making, it is a difference of opinion between a principal and an agent about what course of action will benefit the principal the most. It arises when an agent, acting on behalf of a principal, uses their discretion in choosing a particular course of action.

There are different agency theory relationships. They all have similarities, but each one has a different set of conditions and determinants for its existence.

A corporation is owned by the ultimate owner, which is the shareholder. The shareholder is represented by a principal that can be an individual or a group of individuals, and the executive is responsible for making decisions that affect the shareholder’s investment.

When actions of the company executive reduce the value of a shareholder’s stock, it can develop a negative bond between the executive and the stockholder.

When a company executive acts ethically, there is a positive response from the shareholders.

A negative relationship begins to form when the fund manager does not perform as expected and the investor’s return is not met.

Suppose a fund manager can monetize an opportunity that is considered outside the realm of expectations. In that case, the investor praises the fund manager, and there is a healthy linkage.

3. Board of Directors and CEO

The principal represents the board of directors because the CEO regulates their financial position and status.

The board of directors is more likely to vote against the CEO in the next election if the CEO makes a wrong financial decision that puts the organization at a deficit.

If a CEO were to introduce a new business sector that expanded the corporation into new areas of innovation, they would have the opportunity to present their goals to the board of directors and likely be granted more time in power.

Agency theory can be represented by the relationships that exist between an agent and their principal. In every interaction, the principal or agent you are working for (or with) creates a relationship that directly affects how that ratio is executed. This relationship is essential to ensure maximum comfort for one another.