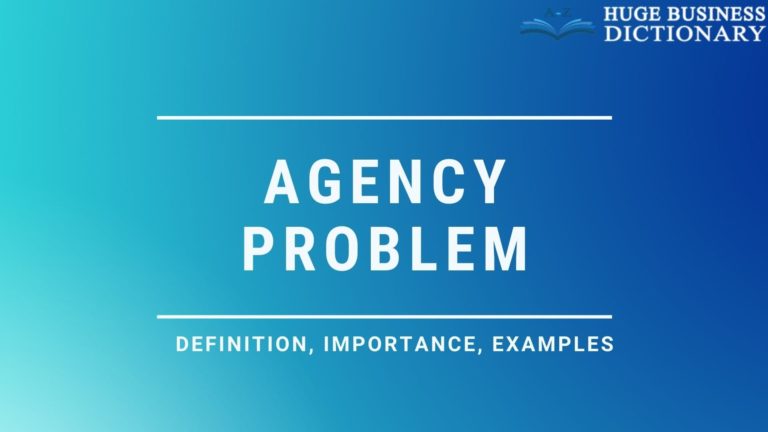 What Is an Agency Problem?

An agency problem can occur in any situation where one party is expected to act in another party’s best interest. The classic example is the conflict of interest between a corporate executive and the company’s stockholders.

The agency problem arises when the manager’s interests are adverse to shareholders’ interests. The adverse interest is the personal financial gains of the manager.

The Agency Problem arises because an agent acts on behalf of a principal. The Agent might have a different skill set than the Principal, occupy a different employment position, or have reasonable time or access to complete the task.

The agency problem is due to the principal discrepancy given the uncertainty involved in task completion. Given this, an agent may act adversely concerning the Principal’s interests.

Agency problems arise in fiduciary relationships when there is a conflict between the fiduciary’s duty to act prudently and the Principal’s or client’s interest. The fiduciary may be required to take actions that are not in the best interests of the Principal or client.

In a fiduciary relationship, a fiduciary must act according to the law and for the good of the Principal or client. In a trustee/beneficiary relationship, a trustee must act following their best judgment as to what is best for those they are entrusted with protecting. In both cases, these duties are vital to ensure that individuals or entities acting as fiduciaries or trustees act by their legal duties and best interests.

Minimizing agency costs is one of the basic principles of business management, and it is vital to the success of any business. Agency costs include inefficiencies stemming from an agent or third party that takes on a task or transaction that may arise while managing the principal-agent relationship and resolving differing priorities. Although it is not possible to eliminate the agency problem, principals can minimize the risk of agency costs.

Principal-agent problems arise when a principal delegates a task to an agent, but the Agent fails to act in the Principal’s interest. The Fiduciary Rule reduces the risk that a financial advisor will have conflicting interests that supersede their client’s best interests. The rule has become a technical and legal nightmare and has stopped many firms from selling or offering their services.

For example, an advisor can offer several investment funds to propel the client’s portfolio growth. However, the Agent might only promote the funds that will pay them a commission for this sale. This is called an agency problem.

To minimize the agency problem, incentives may be put in place to provide managers with additional motivation to act in the shareholder’s best interest. For example, stock options may be given out that allow managers to get a share of the profit that would not otherwise go their way. These incentives get managers to focus on making money for shareholders and not themselves.

To reduce agency costs, boards of directors can tie CEO compensation to a performance metric correlated with shareholder wealth, such as stock price. If a company’s CEO was worried that a potential takeover would be fired, the CEO might try to prevent the takeover, an agency problem. However, if the president and chief executive officer were compensated based on stock price performance, the president and chief executive officer would be incentivized to complete the takeover. Mergers and acquisitions create significant value for shareholders and CEOs alike. Through proper incentives, both the shareholders’ and the CEO’s interests would be aligned and benefit from the upward movement of stock prices.

Recognizing the Agency Problem, agents and principals must minimize associated risks. One strategy is to reward an agent based on completing a project rather than on an hourly basis. Another strategy is to provide performance feedback and independent evaluations that keep the Agent accountable for their decisions.

Real-World Example of an Agency Problem

From 1974 through 2001, Enron Corporation was an energy company based in Houston. In October 2001, it filed for bankruptcy after its main subsidiary was revealed to be worth USD 0.00, and thousands of employees lost their jobs days later. Investigations revealed that the company had been overstating revenues and understating debts via illegal, unethical business practices since 1996.

Enron’s management team took advantage of an unsustainable business model to increase its profits at the expense of its investors. They sold the company’s assets and used the money to pay off debts.

​Shareholders lost over $74 billion as a result of the Enron scandal. The negative impact on investors and the economy made it the largest bankruptcy of its time. A common example of an agency problem, Enron’s downfall, resulted from poor management of shareholder assets.

Management and shareholders of an organization might have different goals. Management’s goal is most likely to maximize their benefits, while the stockholders are most likely interested in wealth maximization. This suboptimal allocation of resources creates agency problems.

Today, all the large businesses have a huge number of equity holders, due to which it is essential to segregate the management from ownership fully.

This separation has numerous advantages as it has no implications upon the regular business operations, and also, they can hire professionals for managing the key operations of the same. However, since external managers will not connect to the organization, they may make problematic decisions for the firm’s stakeholders. This type of problem is called an agency problem.

Some common agency problems are due to stockholder vitality, which can cause the company to take on risky projects that may not be in the company’s best interest.

Depending on the level of risk assumed by the company, this can alter the overall market value of its capital structure. If the project does not perform well, Bondholders might suffer losses, exacerbating agency problems between stockholders and creditors.

The stockholders of a company may have a conflict of interests with other stakeholders such as employees, customers, society, and communities.

Companies should thus develop ethical policies concerning their operations and services that respond to their stakeholders’ interests and expectations to prevent such problems.