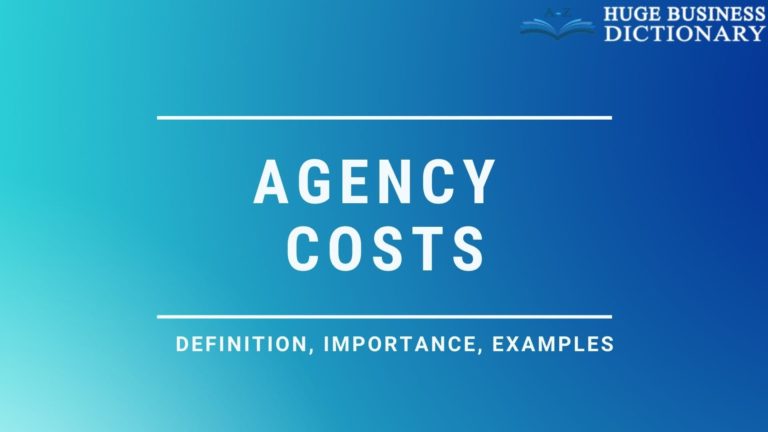 What Are Agency Costs?

Agency costs are a type of internal company expense. This means that the cost is typically born directly by the acting agent, a middle manager, who usually has a conflict of interest with shareholders or non-managers.

This cost usually arises from inefficient activities, such as large amounts of time wasted in meetings and a lack of focus on a single vision.

Agency costs can be found when the corporation is not in alignment with the shareholders and their interests. This creates a conflict of interest, which can lead to inefficiencies and poor performance.

In 1932, American economists Coit Means and Berle used the terms agent and principal about the large corporations that were managing themselves inefficiently. They argued that there needed to be a shift in control to improve efficiency.

A principal-agent relationship describes when one party (the principal) delegates some of its decision-making authority to another (the agent). The example of this is a corporate governance arrangement whereby shareholders delegate power to a group of people called the board of directors. In this case, the board represents the shareholders, while the chief executive officer acts as an agent. This relationship can take on several forms, such as when a court appoints someone to act as an agent.

A Closer Look at Agency Costs

Agency costs are necessary for any well-run organization to manage conflicting parties when one party’s interests ultimately conflict with another. Agency costs are also known as agency risk. This cost exists within any organization where the principals do not yield complete autonomous power. The price of these costs can be either explicit or implicit.

Agency costs can exist in many organizations, including public and private corporations. The most common example of agency costs is inadequate supervision of employees. Another reason for such costs is related to incentives like performance bonuses, stock options, and other carrots, which will encourage the agents working underneath them to execute their duties properly with the end result of helping a company thrive.

If a company’s management doesn’t produce positive returns for its shareholders, it is likely to see a decline in the stock price. This can be a considerable risk for companies, as failures to benefit shareholders and improve the company’s financial position can result in mass sell-offs of a company’s stock, which often leads to a drop in the stock price. Moreover, a substantial divestment of shares could create a negative perception in the minds of potential new investors, which would undermine the prospects of the firm’s stock charges.

Shareholders who are not content with the actions of a company’s leadership can try to change things by opposing and rejecting existing directors and voting in new members. Shareholders unhappy with the company’s performance can vote to replace the old management with new individuals. This sudden change can cost a lot of money and can distract employees from important tasks.

Top-chain recalibration of power is often associated with organizational upheavals that sometimes cause unpleasant and clunky red-tape problems.

Direct costs are of two types

One of the most glaring examples of the first type of direct agency cost is when companies spend a lot of money on a hotel without thinking about their customers’ value from staying in that hotel.

The second type of direct agency cost example is paying for financial statements to the external auditors.

Indirect agency costs can arise when managers fail to take full advantage of opportunities presented by the shareholders. The shareholders may miss out on potentially valuable projects due to managerial fear of failing.

For example, shareholder value increases if shareholders approve the company taking on a certain project. Still, management is hesitant to believe that it will turn out as well as shareholders hope. In this case, indirect agency costs arise from the relationship between shareholders and management but have no direct monetary value.

The Agency Cost of Debt is a concept in finance that shows the effects on the cost of debt capital for a company. A higher percentage of debt can make a company’s cost of debt increase if the interests owed to the different groups involved in financial decisions are not aligned. Agency Cost of Debt involves monitoring internal financing decisions and internal financial reporting to external investors.

An agency cost of debt is where the management team could misbehave to benefit shareholders at the expense of bondholders by taking on high-risk debt. To prevent their money from being used in ways, they don’t like, they might set conditions (such as covenants) on how it is used.

Agency costs (and the principal-agent problem) are inherent in any business or organization that relies on employees. To reduce agency costs one way is to implement incentives schemes. The two types of incentives are: financial and non-financial.

Financial incentives are one of the most common incentive schemes used in the business world. A financial incentive may be paid to an agent to achieve a set organizational goal or meet certain individual performance quotas.

Types of Financial incentives are-

Stock options: A firm can grant a person the right to purchase stock in the company.

Profit-sharing: The management gets a percentage of the company’s profits.

Non-financial incentives are usually less effective at reducing agency costs because they are harder to quantify or observe. Rewards may also take the form of non-financial incentives. These include new offices or workspaces, training opportunities, recognition from co-workers, and corporate cars for specific employees.

In the Enron Scandal of 2001, reports from smallbusiness.chron.com reveal that, undetected by auditors or stock market experts, its board of directors and senior officers had been selling off their stocks at higher prices due to fraudulent accounting data. The inflated share prices of Enron were consequently nosedived when the fraud was unveiled.

The Enron debacle was a financial scandal that involved falsified accounting information. As a result, shareholders lost significant sums of money.