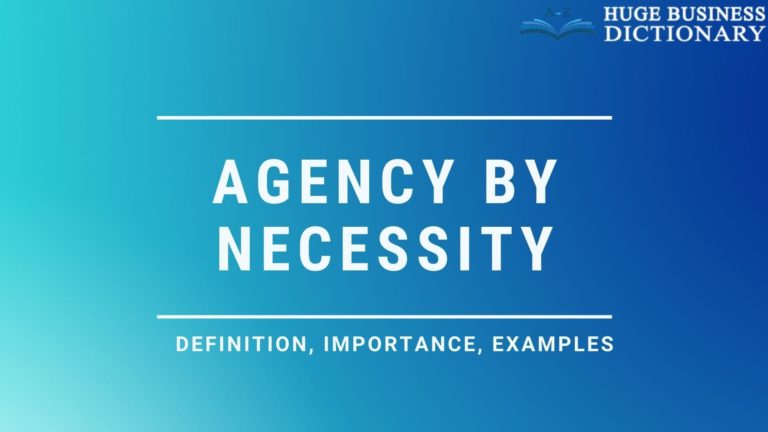 What Is Agency by Necessity?

Agency by necessity is a legal relationship that allows an individual to make decisions regarding another’s finances. It’s commonly utilized when the beneficiary- or investor- cannot make responsible decisions.

In such situation, the courts will appoint a proxy decision-maker who must act in the beneficiary’s best interest. In finance, agency by necessity is required by a third person because the investor cannot make informed decisions about their finances.

When an emergency arises—a serious illness, incapacitation due to mental incompetence, or some other unexpected situation—the courts may permit someone else to make decisions for someone unable to do so. Special circumstances may arise that require an agent to act on behalf of another. For instance, if a person is incapacitated physically, they may need an agent to act. This situation is called agency by necessity.

The concept of agency by necessity is an important one in the world of wealth management. Often, suppose one family member becomes incapacitated or unfortunately passes away. In that case, their responsibilities, including holding the “family agent” position over the assets and finances, may need to be transferred to another family member.

Agency by necessity is often seen in cases involving wealthy individuals or families. These cases can become more fraught when other family members or stakeholders take issue with decisions made for an individual incapable of making them themselves.

Agency by Necessity and Estate Planning

As with many life tasks, estate planning is generally given careful consideration before the unfortunate event of incapacity. However, individuals may be forced to turn to an agent by the necessity for guidance through their estates after they become incapacitated.

Most individuals require the help of a legal professional to prepare, arrange or write an original will. The purpose of putting together a will is to ensure that one’s assets are appropriately distributed when one dies. If there are any debts owed by the individual, not reimbursed before death, an agent by necessity may be needed to locate and reclaim the assets owned by the estate to reimburse the party in question.

It’s essential to consider the different types of assets that can be part of an individual’s estate. These include houses, cars, stocks, bonds, other financial assets, life insurance premiums, pensions. These assests must be distributed as the individual has chosen after passing. Other assets may need to be sold or liquidated to make room for these one or more final distributions. For example, a couple who owns a house could decide to sell it before the death of one partner, with the proceeds going to the surviving partner with the house being sold at a later date for something more valuable.

Few tasks that can be included in the estate planning are

The agency by necessity relationship can be subject to several issues, including potential legal challenges. These may be brought against the agent if the decisions made by the appointed person cause harm to the principal or other family members.

In the absence of a properly executed agency by necessity, courts have been faced with challenges from a legal standpoint about the distribution and disposition of the assets of wealthy individuals, specifically those of individuals who have died intestate. In such situations, courts have been tasked with resolving possible conflicts between family members or issues involving vague language found in a will.