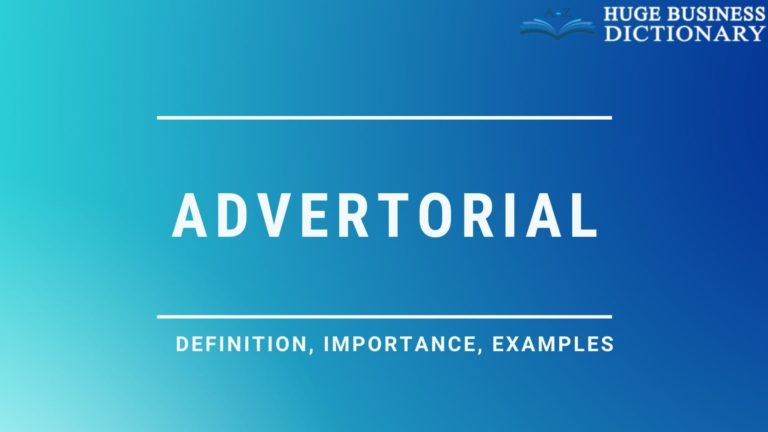 Definition: An advertorial is an advertisement that resembles editorial content. This type of advertising is used to make readers believe the information is true.

The first known use of advertorial

In 1917, the word “advertorial” was first used in a newspaper article to describe a promotional message or article. The term was created from “advertising” and “editorial” to signify paid content disguised as objective journalism.

What Is an Advertorial?

An advertorial is a type of endorsement for a product, service, or website. It is written as an objective news piece, but the advertiser has paid for the content.

Advertorials are written from the perspective of a third party. These articles may convey information, but their objective is marketing a company’s products, enhancing its reputation, or promoting its views. Some mainstream media companies require that advertorials be labeled as advertisements.

Advertorials are a clear and simple way to convey your company’s message. As they don’t rely on catchy slogans, pretty models, or heartwarming music, they’re able to show you how they help your business directly.

Advertorials are formal, sometimes lengthy, pieces of writing with a point of view. Advertorials are used to educate readers about an industry, process, or product. They do not read like newspapers or magazines but can be found in newspapers and magazines.’

A unique blend of editorial content and traditional advertising, advertorials are effective at attracting consumers’ attention. Advertorials are a powerful way to share product or service information because of the ability to integrate a lot of functions and benefit into a single article.

When advertisers use an advertorial to promote a product or service, they should pay close attention to the tone and content of the ad. Articles in financial magazines and science news sites tend to be factual and relatively unbiased. Articles in celebrity gossip magazines tend to be more emotionally driven and may present subjective views.

The secret to effective advertorial content is to use the same voice as the publication’s editorial content. This helps to create trust between the reader and the brand. This format capitalizes on the reader’s problems and fears in a very compelling way. The objective is to create a story that makes the reader feel that “it’s too good to be true, but it really works!”

An advertorial has a style that closely resembles a news article. It includes related facts, statistics, and a call to action, usually with a hyperlink directing the reader to the company’s site.

Sponsored content is content designed to persuade readers to buy an item or service. Advertorial content is similar to sponsored content, but the advertiser pays them to promote the product instead of requiring them to search through third-party sites.

Sponsored content is a tool for publishers to earn more revenue from audiences they already have or grow new audiences they can attract with targeted advertising. On the other hand, advertisers are tools for bloggers to generate additional traffic and interest in their products or services by exposing them to a larger audience without spending any money on advertising.

Advertorial content is anything that appears in conjunction with a paid advertisement. It differs from sponsored content in that it is created and provided by an outside party rather than produced by a company paying for advertisements in exchange for services. For example, Fortune isn’t paying freelance writers to write anything–they’re just paying them to display their product (furniture) in their magazine advertisements (which is exactly what they would do if they wanted to make money).

Advantages and Disadvantages of Advertorials

How to Write an Advertorial

An advertorial is an advertisement in the form of an article. The purpose of an advertorial is to get the attention of the reader without being too promotional. Be informative and provide useful content while still giving people a reason to want what you’re offering. Advertorials aren’t advertisements written to sell a product. Instead, they blend into a publication’s editorial content and appear as though they’re an independent and unbiased opinion. We can’t stress it enough. Don’t be too promotional.

When writing an advertorial, it is crucial to mimic the editorial style and tone of the publication. Not only will this make your advertorial blend in with the publication, but it will also give you credibility and trust among your readers – and that’s the first step toward selling your products and services. When a reader is engaged, the right lead-in sentence can be provided to convince the reader to click on an affiliate link sending traffic to a product or service’s website.

Advertorials represent ethical concerns for both the publisher and the advertiser, especially if this content contradicts the values of the audience. Besides, making an advertorial piece very clear from the publication is a legally binding prospect.

As a side-by-side comparison, Mode Media, a global leader in programmatic advertising, found that mobile users intended to purchase more than desktop users. This is because, with smaller screens on mobile devices, users are more likely to leverage their time on the go by accessing the information that is most important to them. From this, Mode Media found that branded stories increased brand recall by 77%.

In a Nielsen study of advertorial efficacy, advertorials were recognized by 81 percent of Americans ages 18 to 34, compared with 70 percent of the broader population. In a High Point University copy-length study, lighter copy lengths were found to generate better ad and brand attitudes among female subjects than they did for males.

How Much Does Advertorial Advertising Cost?

According to a report conducted by Harvard Business Review, the average advertising and marketing outreach campaign cost $54,014. However, lower-level industry publications can cost anywhere between $70 and $8,000. There was not a significant increase in conversions above the $50 thousand mark.