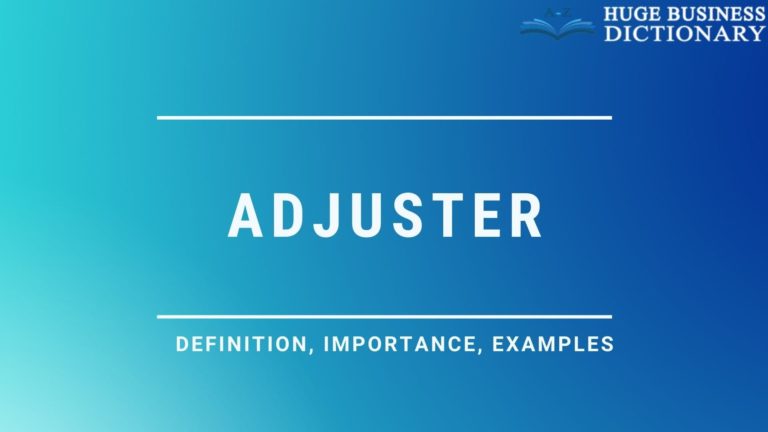 Definition: An adjuster is an insurance agent who investigates the damage done to property by a fire, flood, collision, or other cause, estimates repair costs, and assists in arranging settlements.

Examples of the adjuster in a Sentence

The first known use of adjuster

An adjuster is a rare term. It was first used in the dictionary in 1673, which means it’s over 332 years old!

Who is an Adjuster?

Adjusters have an important role in the insurance industry. They act as a bridge between policyholders and insurance companies. They are charged with examining the facts of a claim to ensure that the company is held to its contractual obligations.

There are different kinds of adjusters. Some work for insurance companies, while others work for claimants or independently. To be eligible for adjuster licenses, candidates must pass an exam and an adjuster training course. Adjusters must keep their licenses up-to-date by completing continuing education courses. If you operate an insurance claims adjusting company overseas, you must obtain a license through your country’s government.

The two types of claims most often investigated by adjusters are property claims and liability claims.

They can be described as a bridge between the client and the insurance company. They carry out checks to ensure all claim areas are correct before moving on to the next step.

They are well-trained and have a wealth of knowledge when it comes to managing insurance claims. The role can get quite stressful at times – especially when dealing with large, complicated claims. Insurer adjusters are the unsung heroes of the insurance industry.

Regardless of their role, it is their job to ensure people are not over-or inadequately protected under their insurance policies.

An individual or small business gets hired by an insurance company to help process claims after a natural disaster, fire, or explosion. An individual is not tied into a company and does not report to management or a business contractually.

Instead, an independent adjuster works directly with a clients’ insurance carrier to help them handle claims on their policy.

The public adjuster defines an individual (or business) who applies for and receives compensation through a claim in an administrative or court process. Public adjusters cannot be employed by insurers and are not employed by government agencies as private parties usually retain adjusters.

The main task of a public adjuster is to establish the correct amount that will be paid to each party fairly and equitably. The adjuster does this by comparing an actual bill paid by the deceased with an estimate from his records of what each party would have paid if there had been no amnestying or other issues when the bill was received.

The adjuster will communicate any available information (such as settlement terms) to the claimant whenever appropriate. Several factors will affect the amount of settlement adjustment a person receives: The type of adjuster employed, how quickly they adjust payments, whether they’re working directly for the claimant or another party.