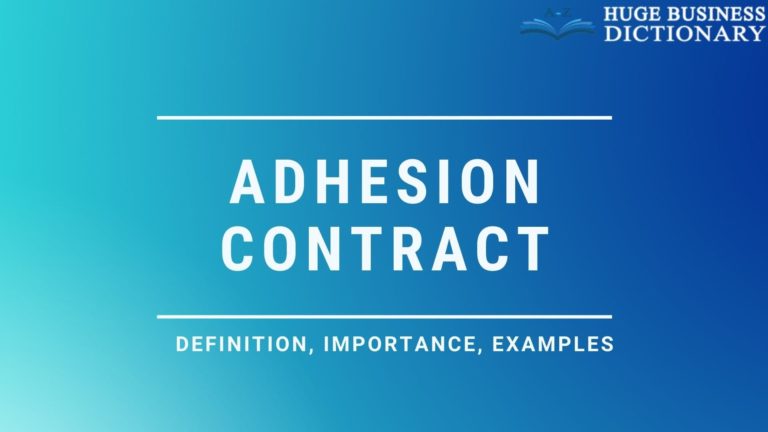 What Is an Adhesion Contract?

An adhesion contract is a mutual agreement between two or more parties where one or more of them has substantially more power than the other in settling disputes concerning the contract terms.

Such contracts may be written by contractors or created by courts or other government agencies when creating regulations governing parties’ behavior within a given industry. One party can use them to force the performance by the other or to obtain benefits from a third party.

Adhesion contracts are standard form contracts that apply to one or many individuals and form agreements between those parties, often used for insurance, leases, and other financial services.

The Uniform Commercial Code requires enforceability for adhesion contracts in the United States. The UCC helps ensure that commercial transactions occur under the same set of laws across the country.

Adhesion contracts are not a recent development in the law, although they have significantly evolved over the years. The earliest forms of these types of contracts were developed in French civil law. However, they weren’t adopted in the United States until 1919, when Edwin W. Patterson presented them in an article published by the Harvard Law Review. Since that time, most American courts have shown support for adhesion contracts and adopted their use.

Adhesive contracts are legally binding long-term agreements that define the relationship between two parties, usually a supplier and customer. Adhesion contracts save time and money if the drafting is carefully done but can open the organization to risk if legal counsel doesn’t vet the contract terms thoroughly.

Adhesion contracts have also been challenged under the doctrine of unconscionability, which is a judicial doctrine that looks to whether the agreement was made in good faith by both parties. Generally, if a contract is considered unconscionable when one party has been purposefully and excessively disadvantaged by the terms of the agreement, it can be declared unenforceable.

Adhesion contracts contain a uniform contract, sometimes referred to as standard form contracts, that do not give the parties adequate opportunity to negotiate the terms of the agreement. Adhesion contracts are often extremely one-sided and leave the weaker party with little or no bargaining power.

Some legal experts have criticized this approach because it restricts freedom of contract. This is a legal concept that allows people to impose provisions upon themselves without government interference.

Adhesion contracts are not illegal but are scrutinized by courts carefully to ensure that a party with better bargaining power does not use this stronger position to bind the other party into an unfair agreement. Courts may strike or otherwise excise certain clauses if they are found to be unfair, unenforceable, or unconscionable.

Furthermore, there is a gap between the electronic contract and its paper equivalent. Social networking sites or freelancing sites advertise it as valid in court, but they are not. For them to be accepted by courts, they must mirror the paper equivalents.

Adhesion contracts are unique among other contracts because they create economic efficiencies shared by buyer and seller. When buyers pay with adhesion contracts, they avoid contracts that contain hidden terms; they know exactly for what they are signing up when they purchase goods or services from a seller with an adhesion contract.

In addition, it is a legally binding document that sets out non-negotiable terms and conditions, such as price, duration, and payment terms for goods or services. This reduces complexity for both parties and frees up time that could otherwise be spent navigating legal processes.

Using an Adhesion Contract reduces transaction costs for each transaction and eliminates some of the complexity of establishing accounts and paying bills.

It also creates incentives for members to remain in good standing with the various payment networks by requiring them to make periodic payments that recover these costs over time.

The buyer is now putting all his eggs in one basket – this contract creates complications when any one party cannot fulfill their end of the bargain; an Adhesion Contract puts the onus on the buyer to bear all manufacturing and freight plus any repair costs.

The main disadvantage of an adherence contract is the unequal power relationship. In most cases, the buyer has little or no power over the seller, and the buyer cannot hold the seller accountable for any shortcomings in quality or workmanship. In other cases, where there is a power imbalance, such as with a hire purchase or a lease, the buyer has the power to cancel at any time and obtain a full or partial refund.