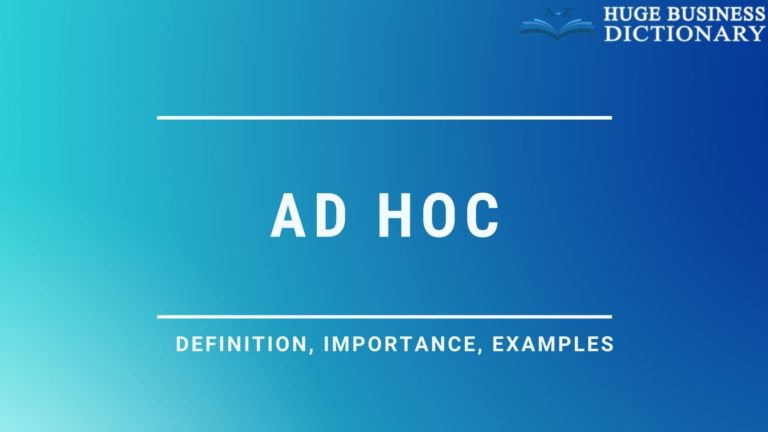 Definition: Ad hoc means something that was not planned or organized in advance. Ad hoc actions are typically taken to solve a specific problem and do not necessarily address long-term issues.

Ad hoc changes can be made in a matter of days or weeks. Ad hoc is typically short-term, reactive, and self-serving.

Ad hoc actions require awareness and approach. Awareness will identify the situation that needs solving and decide how to approach it; the approach will come with preparation and strategy. In addition, ad hoc actions often require judgment calls. Judgment calls arise from considering both the situation and costs/benefits of various options and actions that might provide the solution.

Ad hoc action often occurs when organizations need to form an expeditious response to the disaster. The ad hoc response team is an ad hoc unit of personnel, usually made up of volunteers, that works together across multiple departments within an organization. Ad hoc actions can take the form of emergency communication efforts, directed towards quickly providing information on hazards to all employees; implementation of safety measures or procedures, which may include pulling employees from duties to handle issues during an emergency; postings of additional resources on issues that cannot be publically addressed by regular means; or even simply providing food, shelter, and other services to people during an emergency.

The benefits of ad hoc action are the direct result of a quick supervisor assuming leadership and delegating agency when needed. The ad hoc approach is the default choice most managers make when they don’t realize the total value of developing several team members individually into effective experts with specific skills, knowledge, abilities, and interdisciplinary expertise.

Ad hoc response to perceived emergencies is acceptable even if an organized response to those emergencies is not. However, in-house decisions made on a short-term basis may be inappropriate if organizations do not have the capacity, expertise, or commitment required to make effective decisions in coordination with external stakeholders. Such temporary decisions may harm an organization’s ability to respond effectively to an emergency in the future.

Ad hoc solutions are a type of temporary response that can have a significant long-term effect. Whether dealing with technical issues, implementing solutions for established processes, responding to emergencies, or working with former clients to resolve behaviors that have crossed the line into misconduct, ad hoc action is a type of quick-fix response that often results in substantial negative consequences. Most temporary actions stop working when they are no longer needed or when the person making the decision has recognized that the issue has been resolved.

In cases where ad hoc solutions are not implemented or are implemented incorrectly, internal problems or risks may worsen due to a lack of cohesive responses from different departments and leaders within an organization. Ad hoc actions by management can also create unseen risks to an organization by creating unexpected obstacles that might not have been anticipated.