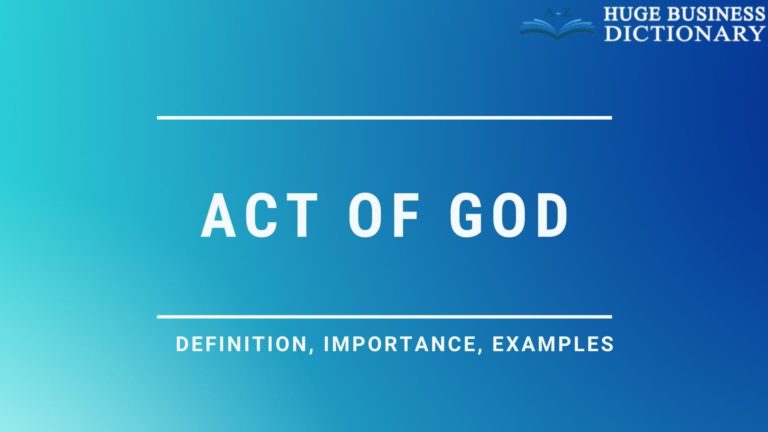 What Is an Act of God?

An act of God is an unexpected and unplanned event that occurs significantly beyond the realm of human plan and control. An act of God generally refers to an untoward natural occurrence that results in damages resulting from floods and earthquakes. A few policies offered by insurance companies cover this type of event, but coverage is limited. For example, the policy may limit how much money will be spent and for how long.

In business, an act of God is a circumstance beyond one’s control that is both unanticipated and inevitable. The insertion of a force majeure clause into a contract is quite similar to the one contained in the fine print of your insurance policy. It states that the contract will not be held legally or otherwise for any damages or other losses caused by acts of God.

An Act of God clause generally means that if damages to property are incurred during a natural disaster, there will be no compensation paid by the insurance company. However, it is important to note that an insured person cannot take advantage of the acts of God clause to take unreasonable actions that contribute to the damage. These clauses guarantee coverage for damages caused by natural disasters or other unforeseeable events. Still, they do not relieve a person from taking reasonable steps to prevent or minimize damage caused by man-made means.

Government agencies are responsible for maintaining property against acts of God. If a state fails to maintain a dam that bursts and causes severe flooding, it can be liable for damages. However, if the cause was sudden and unexplainable flooding due to torrential rains, the issue will likely fall under an act of God.

For most insurance policies, there is no coverage for loss resulting from Acts of God. People who live in areas prone to natural disasters, such as hurricanes and earthquakes, should review policies to determine if extra insurance is needed.

For example, When it comes to natural disasters like hurricanes and earthquakes, many people think they have insurance to protect them. However, a separate policy is necessary to protect your home or business.

What Are Examples of Acts of God?

What Is Another Term for Act of God?

Act of God is also known as Vis Major. A “vis major” is an event that was beyond the control of the insured party, typically because it was natural — e.g., a hurricane or earthquake.

What Kind of Insurance Policies Covers Acts of God?

An act of God is an event that is not caused by man, such as a hurricane, flood, earthquake, lightning strike, etc. Comprehensive auto coverage typically covers these events.

What Is an Insurance Definition of an Act of God?

You might consider the definition of an act of God to apply exclusively to natural disasters. Still, the more professional insurance definition is simply “any event that is deemed uninsurable, usually due to its extreme nature.”

What Does Act of God Mean to Business Property Insurance?

It’s important to be familiar with the details of your business property insurance policy. For example, floods and earthquakes are usually not covered by a basic business policy. You’ll want to make sure you don’t have any gaps in coverage.

What Is the Difference Between Force Majeure and Act of God?

Act of God usually refers to unusual or unpredictable events such as acts of nature like fires, floods, and earthquakes. The law defines force majeure as a situation beyond the control of the parties involved. This can include acts of nature (floods, earthquakes, etc.) or extraordinary circumstances due to human intervention (government lockdown, war, etc.).

Though standard homeowners insurance will cover certain disasters, it won’t cover floods or earthquakes as many people think. To have your home covered against a flood or earthquake, you should purchase flood insurance.